Blog - Latest News
You are here: Home / A Personal Story About Fatigue Part I

In the late 80’s and 90’s; I went from being a gym owner, trainer, and health seminar speaker, to becoming an Internet entrepreneur. For ten long and relentless years, my lifestyle underwent a radical transformation in the wrong direction and unfortunately so did my body.

I started the decade fit, vital, and strong; I ended overwhelmed, exhausted, and overweight even though I knew volumes about nutrition and fitness. The pace of my work life far outpaced my ability to take care of myself. Living with a chronic energy deficit led to overeating and inactivity, an inability to perform well, and health complications.

Despite eating relatively “healthy” and exercising fairly regularly I remained on a “downward trend,” fatigued, and progressively more overweight. Week after week, I contemplated how I would change my life – but I kept moving forward tirelessly – over-engaging and taking on more and more to overcome what I thought were “motivational,” or “psychological” issues, (well maybe there was some of that) but wasn’t.

I had everything going on but was barely hanging on, either far too busy or just too worn out to make the changes I knew needed to be made but couldn’t quite put my finger on. I was keeping commitments to everyone, but myself. I felt stuck. I spiraled down and eventually couldn’t take it anymore.

At 30 years old, I was fat, fatigued, and burnt-out and given my prior career experience that was hard to accept. It wasn’t until the dot-com crash of 2000 eventually lead to my personal crash late that same year, when I finally said enough; “it’s time for a better way.” I needed to set up a lifestyle that was balanced and healthy, amidst the high-achieving life I tended to live.

That was my first real bout with burnout, and it’s consequences, and it would not be my last.

When I finally began to change after months of hopping around from one program to the next and figuring a new course, I knew I would need to change my lifestyle. It was 2001; I was still faced with the relentless demands on my time and energy as a business owner. Long standing fatigue was consuming me, and there was little left over for physical activity.

So I left private business ownership, took a job with another firm and took a couple of steps back. First, I have to admit working for someone else, being responsible for a function and not the entire business was life changing. It actually felt like a vacation in some ways, but nonetheless, it was still a lot of work and a new environment that valued caffeine and fast food. So I needed to able to be proactive in every way if I was going to get back to performing well on a consistent basis.

The interesting thing is I didn’t go on a diet or start exercising in a disciplined way, the way I used to, or deal with the most prominent and visible symptom; exhaustion and overweight. Instead, I began with understanding my present situation, so I knew what circumstances needed to change to free up as much time, space and energy as possible. This was something I hadn’t had enough of for a very long time.

I then started recuperating my energy, getting more sleep, improving the quality of the food I was eating, and increased my physical activity to a point I could handle.

I also knew the only way my lifestyle would get better is if I had something to target that inspired me. I identified bigger goals; goals that required a lot of energy for endurance, that were bigger than weight loss or better health alone. I started with two goals -sales success in my job and a mountain biking event. The biking event affected my sales success as I began to organize many aspects of my lifestyle around performance goals. The better I lived, the better I worked, the better results I would get across the board. 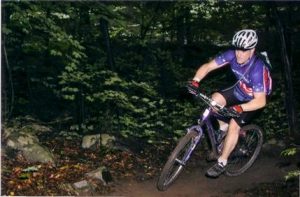 In the days, weeks, and months leading up to that bike event making sure I got enough rest became one of my highest priorities. Realizing I would essentially always be preparing for some type of event in my life, I began to understand that taking the time to recuperate my energy to the best of my ability and living optimally would influence every aspect of my life in a positive way.

That realization about renewal eventually opened the door to understanding balance, but it would still be years before I actually “got it.”

The bike event was fantastic. My plan was to ride with a partner for 24 hours straight alternating every couple of hours. It ended up raining the entire time torrentially with 2” inch thick mud. It was crazy and beautiful at the same time. Sharing the experience with a friend and keeping up my end of things made it meaningful.

What I learned about endurance was priceless. My lifestyle leading up to that bike event was the defining difference. Because my focus was on performing “well,” it changed the way I achieved my goals. After only nine months of being a burnt out entrepreneur, I had enough energy and endurance to complete that ride. I also had one of my best years in business, one year after my worst.

Learning how to renew my personal energy, and optimizing the way I lived for more energy while achieving my goals, I stopped confusing productivity for performance and ended up being healthier and more productive than ever. I also looked and felt better and was able to perform sustainably. Life was good.

Little did I know; I would face a similar situation four years later while developing a new business. In retrospect, my previous success at dealing with fatigue probably, at least in part, had something to do with the fact that I was working for someone else, because once I got back into private business ownership, the burnout began again, and I was beginning to see the pattern.

Thinking I had this lifestyle thing licked, once again, I started taking on too much too fast. While sharing my ideas with clients, not only was I and a small team coaching clients all day, I also was creating knowledge products, setting up websites, developing a team, building an infrastructure, and marketing. I was speaking all over the country, and at times, internationally. It was a highly creative time period, and the risk of driving me into the ground, an experience I knew all to well, was high.

The business had me once again overextended, and my personal life, which ultimately ended up in a marriage at a time where I was swimming in change and disruptive forces would suffer as a result. There was so much bearing down on me, I just couldn’t decipher what was happening. It was a confusing time, and very costly, personally and professionally. It was apparent that there was still something’s missing in my approach and now with the responsibilities of running a business, I was lacking that support more than ever.

It wasn’t long before I felt incongruent with the “balanced and healthy” lifestyle I was promoting. I was exhausted, despite eating healthy and exercising a great deal and getting at least 8 hours of sleep. If good nutrition, fitness and getting an extra hour of sleep anytime I could is the definition of a healthy lifestyle, then it still wasn’t enough.

My ambition was outpacing my ability to maintain the energy levels I needed.

The difference this time, with experience, I had a much better idea of how to handle the situation so that it didn’t linger on forever. And as painful as it was, it was the perfect opportunity to find out what was missing in how I engaged with life.

Being fully engaged is one thing, being over engaged is another, and I was determined to learn for the last time that you can’t exceed your energy capacity and ability to recuperate, and not expect it to negatively affect your ability to function and perform well. In more ways than one; physically, mentally, emotionally, spiritually, in your relationships, and in business, fatigue will crush you.

It happened to me.

In 2006, I discovered an idea called the “Performance Lifestyle.” It helped me to understand that health, performance and sustained success all basically started with renewing and managing personal energy. I already knew that there was more to energy management than sleep alone, but I was still relatively new to the idea. I didn’t understand the degree to which personal energy affected lifestyle.

So I started reading every book I could find on the subject (the number of books was crazy), and it took years to synthesize the never-before-assembled Performance Lifestyle “formula” so-to-speak, which at the core is about proactively renewing your personal energy, so I/you can achieve our goals without the tendency to periodically downward spiral in the repeating pattern like I was experiencing.

Not one is saying that you won’t get tired and at times experience fatigue, but if you are not living from a position of strength and renewing your personal energy regularly so you stay out of personal energy debt, these downward spirals can get pretty bad. This is what I was experiencing.

Not quite. While developing the business that was designed to accomplish this new and improved approach to life, though living a an optimized lifestyle, I was still feeling tired way too much of the time.

Want to join the discussion?
Feel free to contribute!

Why You Experience Constant Fatigue